Diana Senechal is the 2011 winner of the Hiett Prize in the Humanities and the author of Mind over Memes: Passive Listening, Toxic Talk, and Other Modern Language Follies (2018) and Republic of Noise: The Loss of Solitude in Schools and Culture (2011), as well as numerous stories, poems, essays, and translations. From 2011 to 2016 she taught, advised, and led the philosophy program at Columbia Secondary School; as of November 2017, she has been teaching English and civilization at the Varga Katalin Gimnázium in Szolnok, Hungary, where she founded and edits the online student literary journal Folyosó. Her translations of the Lithuanian poet Tomas Venclova are featured in Winter Dialogue (Northwestern University Press, 1997) and The Junction (Bloodaxe, 2008); her translation of Gyula Jenei's poetry collection Always Different: Poems of Memory was published by Deep Vellum in April 2022. Since 2013 she has served on the ALSCW Council. Read more below.

Diana Senechal is the author of two books as well as numerous articles, stories, poems, and translations of poetry. Republic of Noise: The Loss of Solitude in Schools and Culture (Rowman & Littlefield Education, 2011) examines the importance of solitude and our culture's disregard for it; Mind over Memes: Passive Listening, Toxic Talk, and Other Modern Language Follies (Rowman & Littlefield, 2018) examines words and phrases that have been overused or misused in contemporary life.

Senechal teaches English, American civilization, and British civilization at the Varga Katalin Gimnázium in Szolnok, Hungary. From 2011 to 2016, she taught philosophy, created philosophy courses, led philosophy roundtables, and served as philosophy coordinator at Columbia Secondary School. In February 2014, her students released a philosophy journal, CONTRARIWISE, which which now enjoys international readership and participation. In May 2017, through a collaboration and correspondence that grew out of CONTRARIWISE, Senechal taught for two weeks at the Sainte Pulchérie Fransız Lisesi in Istanbul. In March 2020, in Hungary, she founded the online student literary journal Folyosó, whose first issue appeared on May 11, 2020.

In her first year of public school teaching, at I.S. 223 in Brooklyn, she directed her students, all English language learners, in a production of The Wizard of Oz, which Michael Winerip describes in "Courage? Follow the Yellow Brick Road" (New York Times, June 14, 2006). She continued to teach ESL for three more years before leaving her position to write Republic of Noise. After finishing the book in 2011, she joined the faculty of Columbia Secondary School for Math, Science & Engineering.

Senechal is the 2011 winner of the Hiett Prize in the Humanities, awarded by the Dallas Institute of Humanities and Culture. From 2011 to 2019 she served on the faculty of the Dallas Institute's Sue Rose Summer Institute for Teachers. She holds a PhD in Slavic Languages and Literatures from Yale, with a dissertation on Nikolai Gogol. Her translations of the Lithuanian poetry of Tomas Venclova have appeared in two books, Winter Dialogue (1997) and The Junction (2008). She read her translations at PEN America's "Writers in Exile" event in 1988 and at the International Czesław Miłosz Festival in 1998. Her translations from Hungarian—of the poet Gyula Jenei, the essayist Marianna Fekete, and the story writer, blogger, and journalist Zsolt Bajnai—have been published in Literary Matters (Issues 11:3 and 12:1), The Satirist, and The Massachusetts Review. A book of her translations of Jenei's poems, Always Different: Poems of Memory, was published by Deep Vellum in April 2022.

Her education writing has appeared in Room for Debate (New York Times), Education Week, The New Republic, Double X, American Educator, Educational Leadership, The Nation, and various education blogs. Her article about education philosopher Michael John Demiashkevich was published in American Educational History Journal, vol. 37, no. 1 (2010), and was selected as AEHJ's Article of the Year.

Since 2013 she has served on the council of the ALSCW (Association of Literary Scholars, Critics, and Writers), where she organizes and participates in events, contributes to the ALSCW's publications Literary Matters, Literary Imagination, and FORUM, and helps plan the annual conference. On March 20, 2022, she and the ALSCW hosted the online event Straight Labyrinth: János Pilinszky in the Poetry, Music, and Thought of Three Hungarian Artists.

Her interests have allowed her to pursue a rich variety of occupations. In San Francisco, she worked as an editor, counselor, and computer programmer; in her own time she played music and took courses in animation, screenwriting, and film acting. She has written songs, self-released two CDs, and contributed lyrics to the Breeders' song "Head to Toe." (You can read the story about it here.) In Tucson and New York City, before teaching, she worked as an editor and took classes in acting and improvisational theater. She founded a literary journal, Sí Señor, which she edited and ran for five years.

She has studied cantillation (leyning) on her own (with the help of several tutors) and at the Jewish Theological Seminary. As of December 2, 2017, she serves as the lay chazzan (cantor) of Szim Salom in Budapest.

In addition to the above, she plays cello; writes poems, stories, and songs; takes long bike rides through the Hungarian countryside; and enjoys memorizing poetry in various languages. 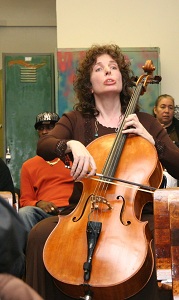